Save 20% with DIY
Our Kent Showsite is open by appointment 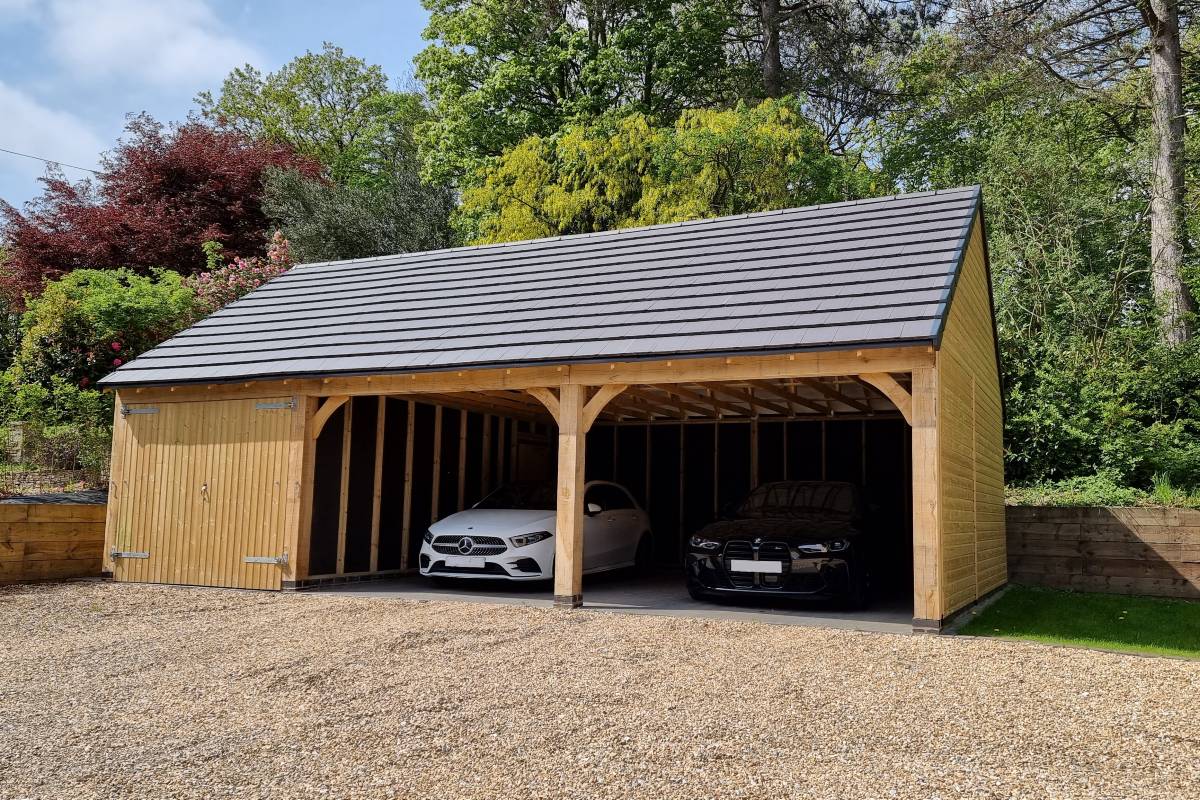 Stacey lives with his wife and two children in a gorgeous semi-rural area in Derbyshire, near the Peak District National Park. He had his independent house built in 2015 using a mix of materials - predominantly wood and bare brick.

While the family originally planned to have a brick garage added to the property, as the build progressed, they changed their mind. There is an abundance of trees near the house and there are a few wooden gates around the garden, so they decided a timber garage would suit the area best, while matching the look of their modern home.

The result is an outbuilding which seamlessly blends in with the property and the surrounding area.

Stacey started researching garage building companies back in 2015, at the final stages of the house build. He found four businesses which fit his requirements, including us. He spoke with us and said we were “very helpful.” Due to some delays with the main construction works, he had to put the garage project on hold for a few years.

In 2021, he decided to hire Chart Garages, because he found our communication to be “very prompt and clear - I got a quote the very next day.” Just before placing the order, our Christmas offer went live on the website, so he booked the installation even more eagerly.

Stacey already had planning permission for the original brick garage he had planned to build, so he didn’t need to submit a new one. He didn’t have any special requests for the carriage house, so he could go ahead with the installation right away. Stacey placed the order in mid-December 2021 and the wooden garage was standing proud on his property at the beginning of February 2022.

The process, according to the man, was “very simple and straightforward.” He employed a local builder to lay the foundations for the carriage house, based on the drawings he received from Chart Garages. Once everything was ready, we went on-site and built the carriage house. It took our team only a day and a half to complete the outbuilding. “They were very quick,” comments Stacey.

The carriage house is located in front of Stacey’s house and is 10.5m wide by 6.1m deep. It consists of three bays. Two are open bays, in which he and his wife park their cars. One is an enclosed room, which they use for storage.

Stacey opted to get the roof tiled by a local builder to match the house roof perfectly. He is very pleased with the result. “Honestly, it looks amazing,” he remarks.

Stacey has no regrets - there is nothing he would do differently, if he was to go through the process all over again.

He says that: “The guys who installed the carriage house were exceptional, superb really. They were very knowledgeable - they explained to me everything they were going to do and the problems they could encounter. They completed the work ahead of schedule and were very courteous. Overall, they were very, very good.”

Thoughts from the design team

Stacey worked with Megan in the Chart Garages team on this project and she comments "It is rare that we get to see the finished building when the customer has selected to tile themselves. To see the extra thick oak uprights and bracing, tiles and rural setting all come together is actually a real treat. This building has become quite the poster child now with other people wanting the same specifications as Stacey" 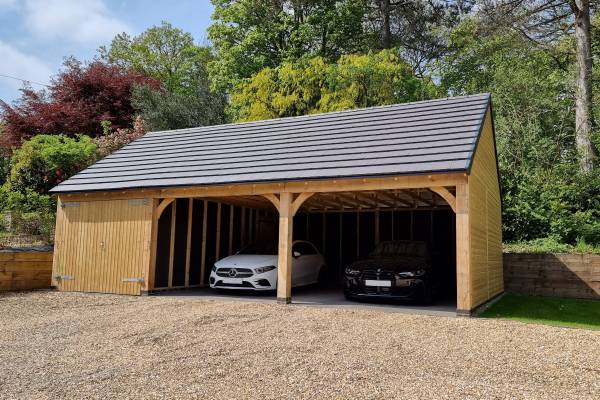 We explore a stunning oak fronted carriage house with two open bays and one closed garage in Derbyshire
Read more... 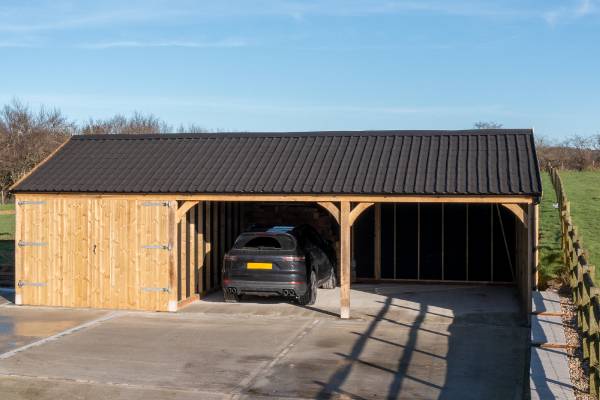 Do you live in a conservation area or AONB? An oak framed garage could be the perfect outbuilding, could it lead to a successful planning application?
Read more... 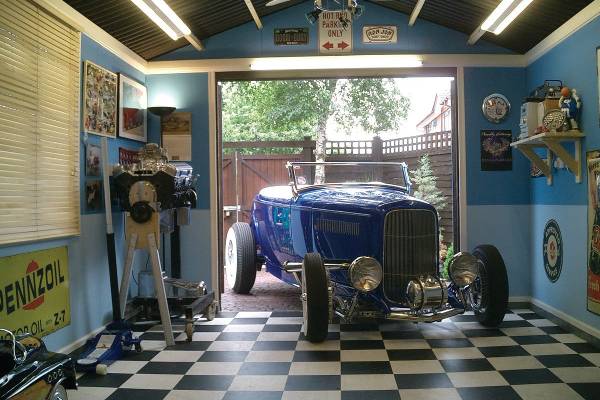 A timber workshop or garage is not just storage, it can be the start of dreams, your own person hobby space or room to express yourself.
Read more...
Discover our range of Garages & outbuildings
Trusted by generations of homeowners, our garages, carriage houses, carports and workshops are the time-tested and proven choice for high quality long-lasting buildings.
Garage buildings 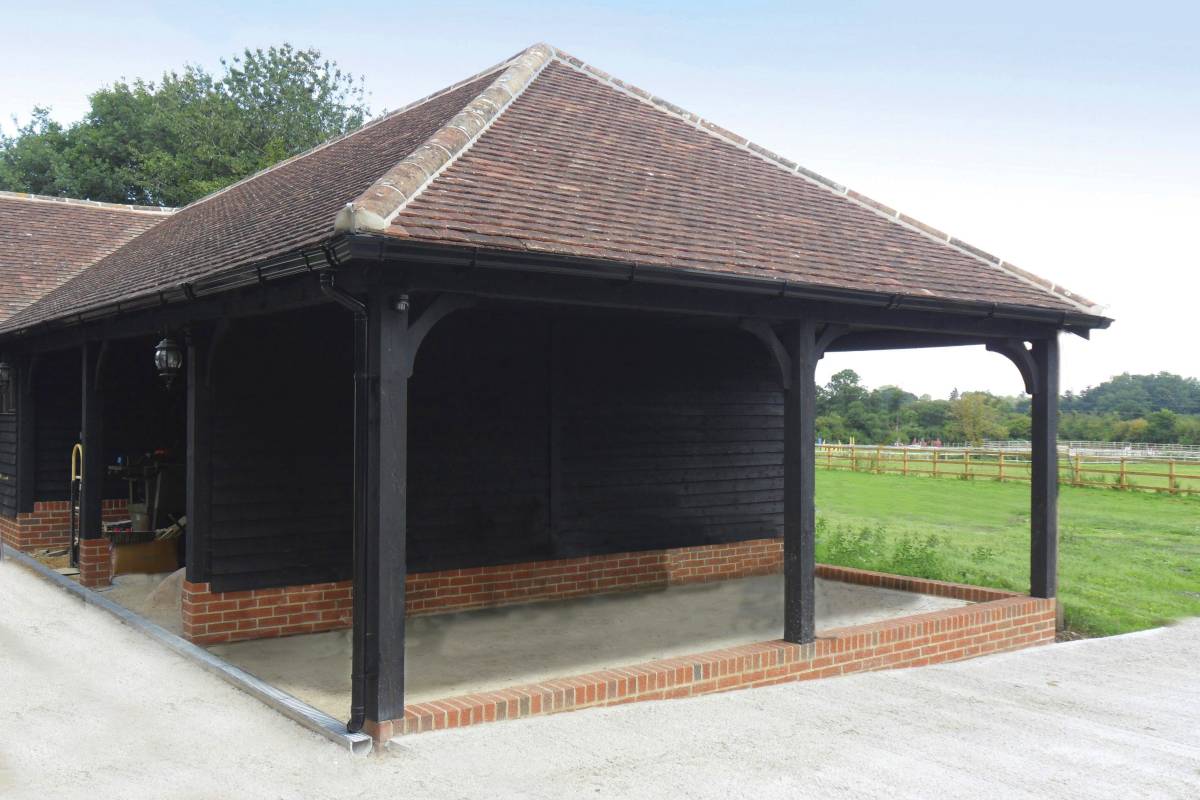 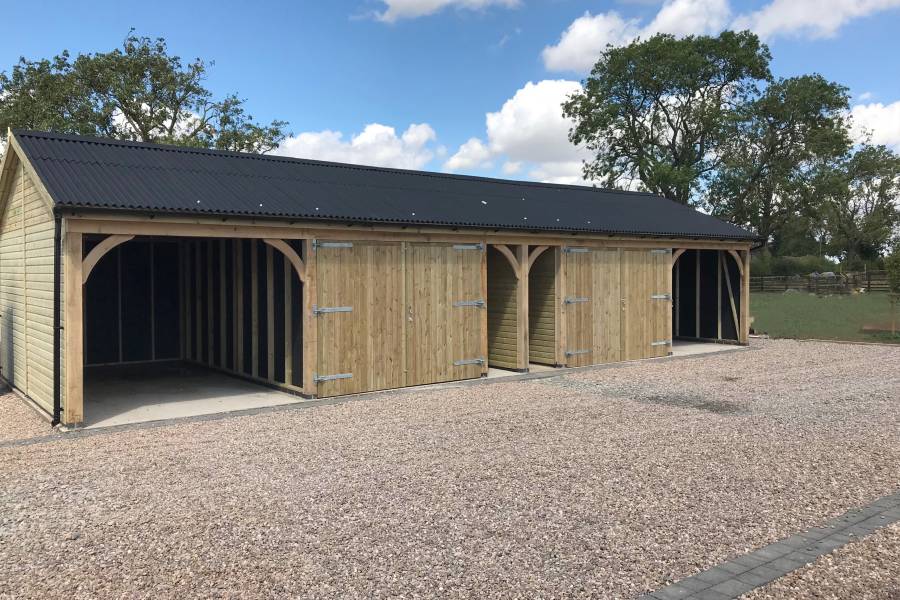 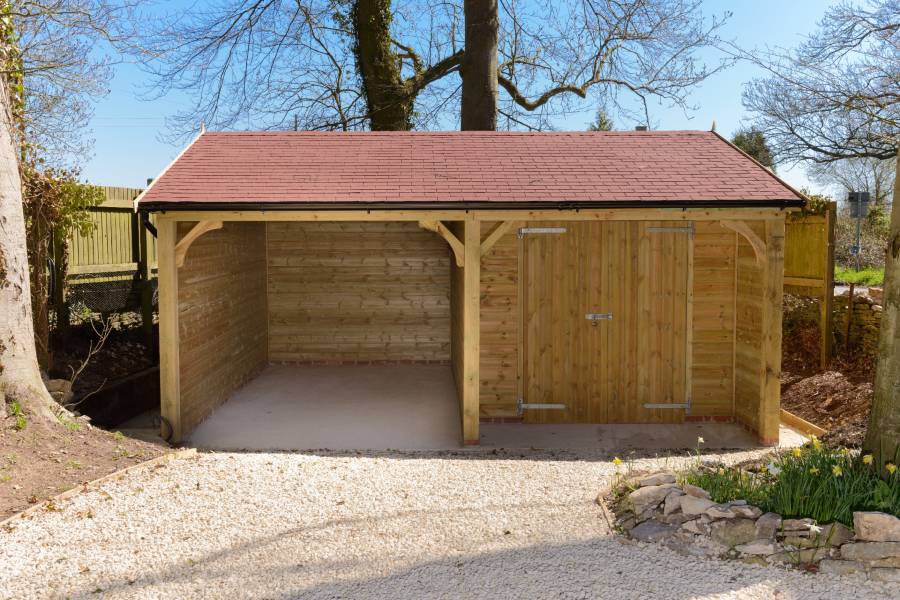 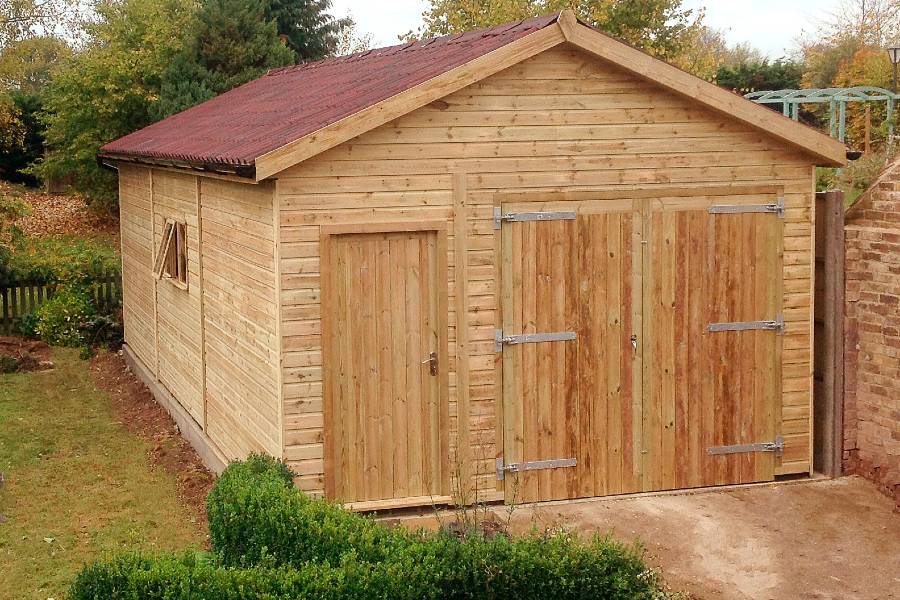 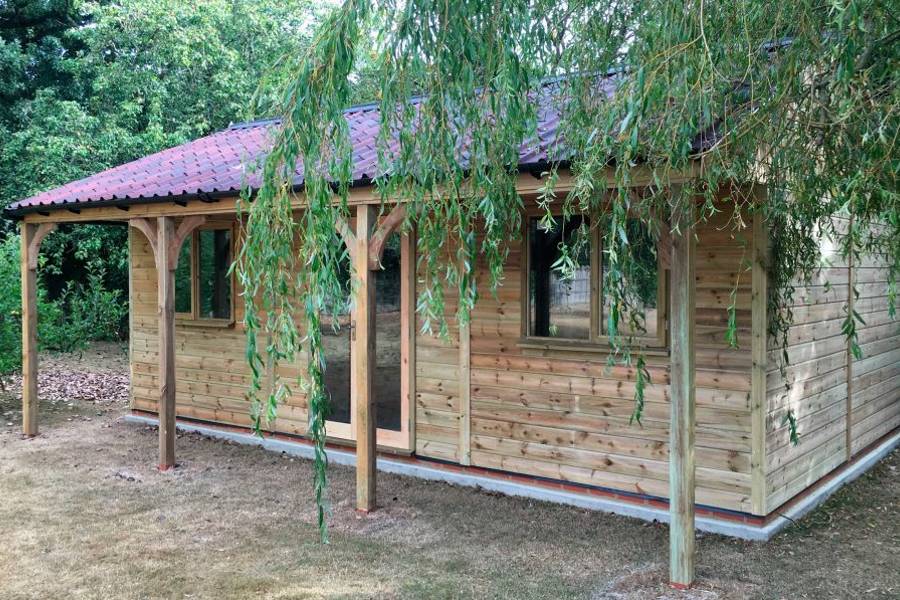 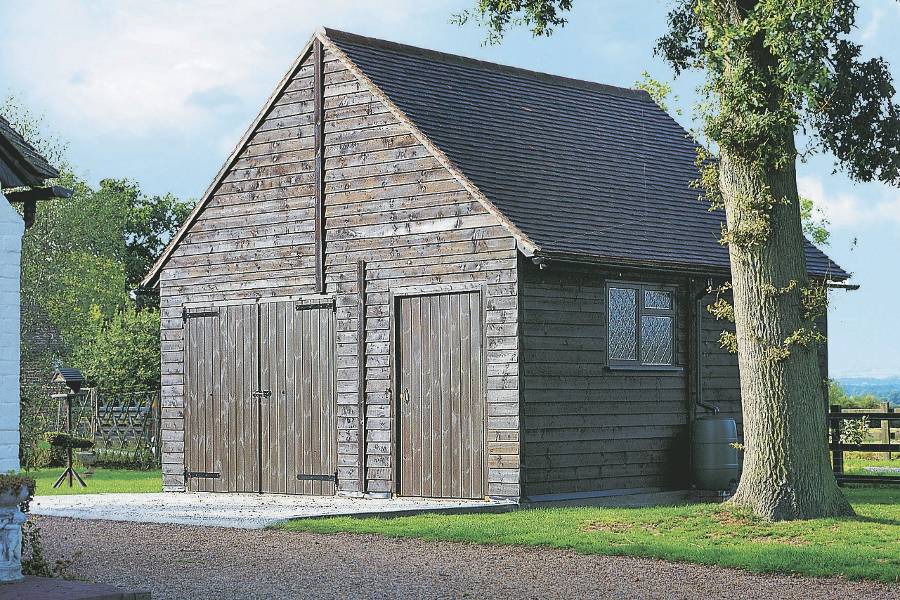